Here an additional code to rotate a cube with texture. It is not very fast with larger images and thus a lot of room for speedup improvements... 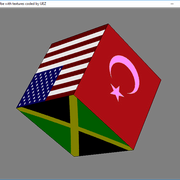 For i = 0 To iBase91Len - 1 'convert result String To ascii code values
aReturn(i) = Asc(sDecoded, i + 1)
Next
Return @aReturn(0) 'Return Pointer To the array
End Function

If you want to see it with larger images visit pastebin.com

I assume that this code will not run with other os than windows because of the decompress function in Ntdll.dll which is required to uncompress and save the bitmaps to disk.

Very nice UEZ.
Turkey is the one I have not visited.
I now have six flags on my desktop, but they look OK, so I'll leave them there.
Here is similar, but for the gambler, not the tourist.

Your code runs well on 32 bits (especially -O3), but the best is -gen gas.
As usual 64 bits is jumpy here.
I shall post my Euroflag doodle again just before brexit with the flag suitably adjusted to celebrate the occasion.
Tested on the new 1.06 version.
Thank you.
Top

As always, well done dodicat. Did you create it from scratch? You are usually so fast providing your example.

One question: where is the code for transformation of the image to the cube? I didn't find it yet. ^^ Can it handle small image on large objects without
perforation?

Turkey is a wonderful country but current government is not the best choice to make the country great (again).
Last edited by UEZ on Feb 22, 2019 14:47, edited 1 time in total.
Top

dodicat wrote:Here is similar, but for the gambler, not the tourist.

I also do gamble casually!

Both pretty examples this said.
Top

The compression of images into the source code is interesting. UEZ do you have code to make the data statements from images?

I would see the compression and decompression of images as a separate Tips and Tricks example.

UEZ's cube rotates toward the mouse. Dodi's cube will tip up or down but only rotates around the vertical axis.

What would be a nice is if someone had the ability to write a program that could draw textured polygons in a walk through 3d world.

Or a walk through 3d world that uses pixels instead of polygons. That is, a 3d version of the pixel based objects I used in this example I used for the ambulance as a rotatable isometric object.
viewtopic.php?f=15&t=27052
Top

The compression of images into the source code is interesting. UEZ do you have code to make the data statements from images?

I would see the compression and decompression of images as a separate Tips and Tricks example.

Well, I've written the converter with AutoIt which can be found here: FB File2Bas Code Generator v0.80 build 2019-01-05 beta.zip. Just start the exe and a small GUI with FB Logo will appear. You can use the rmb to change some settings. Just drag'n'drop some file to it and it will generate the FB code. Source code is included.

BasicCoder2 wrote:UEZ's cube rotates toward the mouse. Dodi's cube will tip up or down but only rotates around the vertical axis.

Look here for some information about the math: http://petercollingridge.appspot.com/3D ... ng-objects
Top

I have read those kinds of basic explanations and have posted some of my efforts to the forum including the rotating textured cube demo.
None of it is like the condensed maths Dodicat uses for a fast computation for converting 3d data to 2d display.
Also getting control over the cube's rotational position, as for example you can with Blender, would be a nice addition.
Paul Doe attempted to explain it with a flying paper plane example but it was all a bit complicated.
See example in general section of forum posts on positioning the cube.
Top
Post Reply
7 posts • Page 1 of 1

Return to “Tips and Tricks”

Users browsing this forum: No registered users and 4 guests