User projects written in or related to FreeBASIC.
Post Reply
9 posts • Page 1 of 1

AZdecrypt is a fast and fully multi-threaded - homophonic - substitution cipher solver and more. 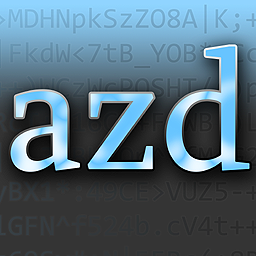 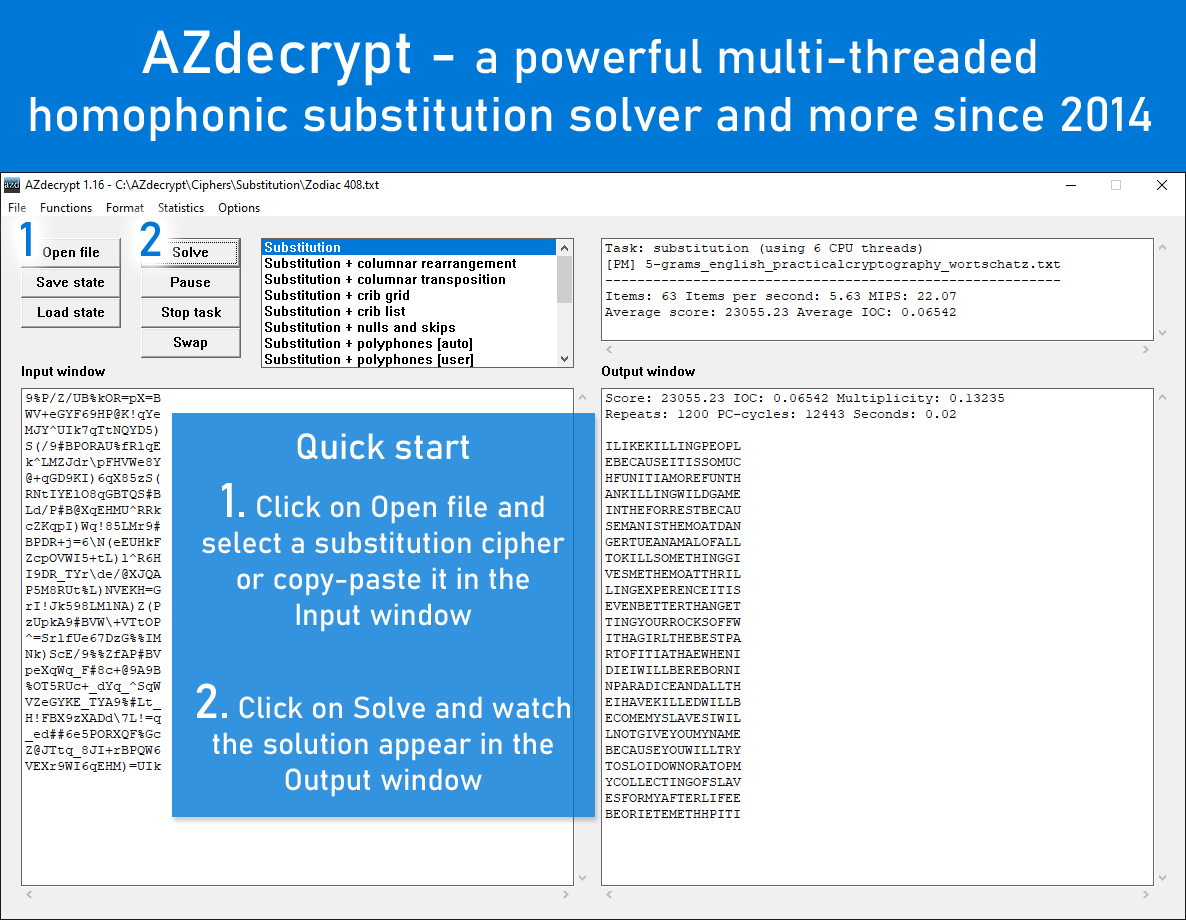 When I download the zodiackillersite.com my virus program says it contains malicious code...?
Any one know the status of this?
Top

It says that becuase the file acts as a code genortor like those used in worms viruses and malware
but i fail to see the reason as to why the source code would not be released mostly becuase its a .com which isn't really used any more
I would be careful in any case
Top

I'm sorry qbgenie and JBoyd333. I haven't looked at this page since the beginning of the project. The program has come a long way since then and I decided to do an update (bump) of the main post about the current status of the program.
Top

AZdecrypt 1.12 wrote:- Optimized "nulls and skips" solver with the help of smokie treats.
- Updated Reddit n-grams. This however increased the download to about 560 megabytes.
- Much faster Solver performance mode, which can be toggled on or off from the Options menu.
- Fixed an issue with the "row bound" solver so that it now correctly displays the "N-grams" and "PC-cycles" statistics scores.
- AZdecrypt determines the number of CPU threads available to your system and automatically assigns 3/4 of it to the solvers. The number of CPU threads can still be changed through the Options, Solvers menu.
- Support for up to 65536 CPU threads.
- Slightly overhauled look and feel.
- Fixed lots of small issues.

Again a huge update and I will illustrate some examples of the new functionality during the next days.

- beijinghouse made a special 8-gram system that is only 50% slower than 7-grams and uses only 8 GB of memory! It works very well and he can elaborate on how exactly he achieved this. You will still need about 12 GB of ram to use these.
- beijinghouse also came up with a speed optimization that aborts the n-gram score calculation when it is known that the new_score cannot be higher than the old_score. This works very well with sparse n-grams such as 7-grams or higher. For now it is only used with beijinghouse's 8-grams.

- Added extensive cipher and plain text library, it can be found in the "Ciphers/" folder.
- Internally the score calculation is now using entropy instead of the index of coincidence. This may change the scores you are used to seeing a little bit. A small adjustment to the n-gram ini files has been made to reflect this. Old ini files still work via internal conversion.
- You may notice a slowdown of the solving speed (about 20%) due to a big improvement to most of the solvers such that for example 500,000 iterations are now worth about 1,000,000 iterations with a greater effect on ciphers that tend to get stuck.
- New function "Bias n-grams", bejinghouse asked for this, it can be found under "File, Load n-gram bias" and it tunes the n-grams in memory to some text of your choice. For example: to offer support for rare occurring n-grams such as names.
- "Batch ciphers (substitution)" now supports plain text accuracy testing, a example can be found in the "Ciphers/Batch/" folder.
- New solver "Substitution + units", it allows to solve a variety of cipher schemes such as masootz's cipher or operations on symbols, rows or columns such as remove, expand, separate into 2nd key, replace and reverse.
- New option "(Substitution + sequential homophones) Sequential weight: 5", setting it lower will decrease the weight of the sequential homophones and setting it higher will increase it.
- New function "Normalize n-gram factor", the button can be found under "Options, Solvers" and it will normalize the n-gram factor to some internal plain text. This ensures that AZdecrypt performs optimally with your n-grams.
- Fixed major 1.14 issues with the following solvers: columnar transpostion & rearrangement, nulls and skips, and poly [auto, user].
- Removed many code redundancies in the source (merged solvers etc) and it is about 33% smaller.
- New function "Batch settings" to optimize temperature etc, suggested by beijinghouse.
- Solvers are using much less memory outside of the regular n-gram memory use.
- Vigenère solver works much better now.

- Added timer to solver output so that the user knows how much time to program took to arrive at a certain solution.
- Added the option the add the PC-cycles stat the solver output "(General) Add PC-cycles to file output format".
- Fixed IOC inflation bug with Row bound solver that happened with certain ciphers.
- Fixed bug with Vigenère solver when using entropy weight other than 1.
- Fixed possible crash with Batch settings.
- Minor bug fixes and improvements all over the place.
- Compiled with the new FreeBASIC 1.07.1 release.