TileCity is a tile based 3D world, using OpenB3D.
You can define the world layout with a simple text file. TileCity generates a 3D world, which you can explore.

That's a very early version V0.01, so don't expect too much.

I want to load a SimCity map and drive around in it :-)
Top

You will also find a short video at proog.de.
However, there's no driving physics. You can just simulate a race by moving the camera, bu you can define your own track by a simple ASCII file.

@badidea: That would be cool.

@Lachie: Actually I'm extracting the vector graphics lib from the train simulator and make a test program for documentation how to use it.
Top

i have made a version with car/flight sim + map edit,load,save if you are interested chung wrote:i have made a version with car/flight sim + map edit,load,save if you are interested

chung wrote:i have made a version with car/flight sim + map edit,load,save if you are interested

Of course I am. That looks really good. I will download and check it.

Edit
It's amazing, what you made out of this demo. I specially like the way you detect if a car is on street. It's not an easy task. The street tiles are painted with street and grass next to the street on the same tile. The virtual car begins to rumble, when driving on grass, no matter if the position still is on the street tile but has left the grey ground.
You probably check the ground color to decide if the car is on street? I tried to find out from the lib source, but did not get it.

I've put a link to your version on proog.de.
Top


Looks great. I've made a new video about your version of TileCity, which shows flying around and also the 2nd plane.
http://www.proog.de/joomla/index.php/projekte
Top 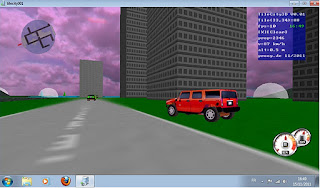 I like the traffic in the streets, especially how cars find their way on the streets, drive on the right side, and drive around obstacles.
I made some videos about your new mod.
I also built a very simple airport, available as download version 0.02a and a little video showig it (proog.de, TileCity3D - Alle Videos / TileCity3D - All Videos).

@chung:
Can you put your mod into separate subroutines? This would make it easier to include the mod into newer versions.

We can use #define and #ifdef to include the mod, so compilation with and without the mod is possible.

We can include files at different positions, if necessary.

It would be the easiest, if we just need two calls like that:


You did lot's of changes, so this would not be enough, but we should try to make it as easy as possible (if you're interested, of course).

btw:
Version 0.02 of TileCity allows the definition of racetracks. You added some cars. It would be nice, if we could put that together.
Top

you can find it there


Great, I will check it. I've been busy too.
There is a version "TileCity3D - Chung mod interface v.0.02c" for download at proog.de.
It's not complete working, I didn't really finish it, but it's an example of how we can interface our codes.

The file "tcmod.bas" is the interface to your code. TileCity just include it (as an selectable option) and do only some calls to your code (actually just some parts of it).
I think it's much easier to proceed if we keep the sources in separate files, than mixing code in one file.
Top
Post Reply
59 posts