I have made a new header file for GMP, version 6.0.0a, which has a few new functions, instead of adding to the old header file.
I used FBfrog 1.5 to convert the .h file to a .bi file, the .h file has some inline code that can't be translated so I removed that part.
The new header file that was produced is edited in some places to get it working, I also removed a bunch of empty lines to get a more cleaner look.
I also wrote a sort of program to check the working of the header file (also handy to see which keywords I need to add to my GMP keyword highlighting file).

First time that I made a header file so any comment, complains or suggestions are welcome.

However, testing with my own stuff, which basically uses the gmp floats to get trig functions e.t.c. it tested OK.

I was somewhat surprised by your error message, had I put the wrong program in the 7z file. I even downloaded my own file to check it, it had the correct bas file. I even downloaded FBide to see if I could get the same error message as you.I even put the gmp.bi and libgmp.a for the file into FBC 1.00.0 and FBC 1.00.1. I compiled the test_gmp file with FBide, FBedit, CSED_FB-1_0_6_7, but all cases it run correctly, even the produced .EXE files run correctly. I'm unable to recreate your error message.

I use FBedit myself (I started with FBide but switched to FBedit). When I wrote the test_gmp.bas file I noticed that the compiled EXE file runs without problems under FBedit but when starting the EXE file on it one (file manager/window explorer) it crashed. So before I included the bas file I tested that it would not crash when running EXE file.

The last error I had was the same as your error message, it's caused by ret_val = Gmp_sprintf(str_, "3:Pi= %.*Ff ", 20, f_op1 ) it seems that the problem is with str_. Under FBedit it would run correctly but on it one it would crash with the error message you had.

The program ran without a crash under FBedit and on it one, and I added it to the 7z file.

So I the only thing at the moment I can do is to ask you to do a few thing.

1. Does the EXE file on it one also stops working.

If none of these things works I out of options and the question would be if FreeBasic or GMP is cause off it and how to figure out what the cause of it is.

I would appreciate feedback on this from you and others who tried the program if it worked correctly or if it crashed and if one or more suggestions worked or not. (i know that only a few members use GMP so any feedback would help).

PS. I have seen your program before on the forum and noticed that can be in-proved / cleaned up, I will post a version with comments.
Top

For your test code to work here:
If you initialize str_ as a zstring * 1000 (say), then for the zstring ptr parameters use @str_.
The zstring ptr ptr needs a seperate variable derived from str_ via a cast.
Also, I've omitted the str_ in str_= ~~~

I also tried your original test code in another IDE (wxFBE), no difference.

For my functions, mess about by all means, but they are only a FreeBASIC trial at some of mpfr from gmp.

I believe some mpfr functions becomes inaccurate at several thousand places (according to member srvaldez a while back), the power series shouldn't, albeit with a loss of some speed.
Here's your test adjusted to work here:

/'
Program to test/check gmp.bi file and to figure out wich functions are new (for my keyword highlighting)
mpz_inits(), mpz_clears(), mpq_inits(), mpq_clears(), mpf_inits(), mpf_clears() will not work under FreeBasic
Mpz_array_init does work but the array can't be cleared better do it the FreeBasic way
'/

Obviously, some of the paths are not complete.
Where should this files be placed (after I find them)?
In what Subdirectory does FB expect to find them?
I move frisian's gmp.bi and libgmp.a to the appropriate subdir

Your problem made me think about the instructions I wrote done they could be use some clarification.
So for you and others that have problems I hope that gives a better idea what needs to be done.

First, when installing a new/other version of FreeBasic the hole process needs to be repeated.

Noticed that you use St_W build so I downloaded the latest build and unpacked in the root of the D drive, they look somewhat different from the official versions but in principal they are the same.
The directory tree look like this (in ASCII graphic).

Also you need to include a directory named "CRT" that contains two files that are needed for gmp.bi to work properly. Integer You have this part right otherwise you had a different error message.

You should check if there's a file with start with "libgmp.*", if it's ends with ".a" it should be rename/moved or simply overwritten, all other files beginning with "libgmp.*" should be renamed or moved to prevent FreeBasic from using them. (FB looks for the first file that begins with libgmp, some info in that file tells it if is a static library or data for use with a .DDL. Therefore it important to that files like libgmp.la are renamed to something like libgmp.la.old)

I hope this helps, if not let me know.

Put frisians gmp.7z into a folder, call the folder what you like.
Extract the gmp.7z into that folder.
Using fbide, I can just click frisian's test directly and the whole thing runs in the folder.

Then, if you are happy, put the .bi into the inc folder.
You could rename it to gmp6.bi if you already have a gmp.bi.

Then pop the libgmp.a into the lib folder.
Then it is available generally with your FREE Basic.

Nice that it is a static lib, no dll's to be bothered about.
Top

If you rename it to gmp6.bi make sure that you change #include "gmp" into #include "gmp6" or FreeBasic will use the old header file.
Top

@frisian
@dodicat
Your explanations cleared the fog.
Thanks.


From the test file:
In the output section
gmp_sprintf(...) failed

However, and most important:
I now have a "workable" GMP.

Glad to hear that you got it working.

That's because they have no print *str_ statement.
The file was created to see if the header file worked and that the compiler would compile without error message's. Therefore it does not print much.

Gmp_printf print directy to the console, Gmp_sprintf, Gmp_snprintf and Gmp_asprintf make a formatted text that is send to a Zstring using a pointer. There are also some other statements that convert a GMP variable to text. I suggest you read the GMP manual (specially when your new to GMP), somethings like formatted output is a little hard to understand because GMP is written in C.

You could try dodicat's altered version in his post directly above your first posting.
Top

I think that your programs (test_gmp.bas and dodicat's own stuff) show how to use GMP in FreeBasic plainly.
I would like to translate your programs into Japanese and introduce them to Japanese people on my website.
Please consent to this.
Top

For this version or

you may have to add one line to my functions code:

Thanks for your quick reply.

>I have:
I think that you consent.
I upped it on my website.
http://makoto-watanabe.main.jp/freebasic/tipsGmpFunctions.html
If you have inconvenient points etc., I will correct / delete them.

P.S.
I think that it is useful if you add Operator (Integer divide) to your functions.

Also, if you add your own stuff to the FreeBASIC document (e.g. following page) ,
I think that not only Japanese people but also the people of the world will become happy.
Http://www.freebasic.net/wiki/wikka.php?wakka=ExtLibgmp

Anyway, I am deeply moved by your program.
Top

Here is div (lines 23 to 34) using strings.
The other code is my own mod/div -- NOT GMP.
I have tested random strings against each method.

When compiling in my environment, the following error occurred.
error 41: Variable not declared, mpz_div in 'mpz_div(@answer,@mn1,@mn2)'
Therefore, I tried to change "mpz_div" to "mpz_cdiv_q".

I would appreciate it if you could tell me how to fix it. 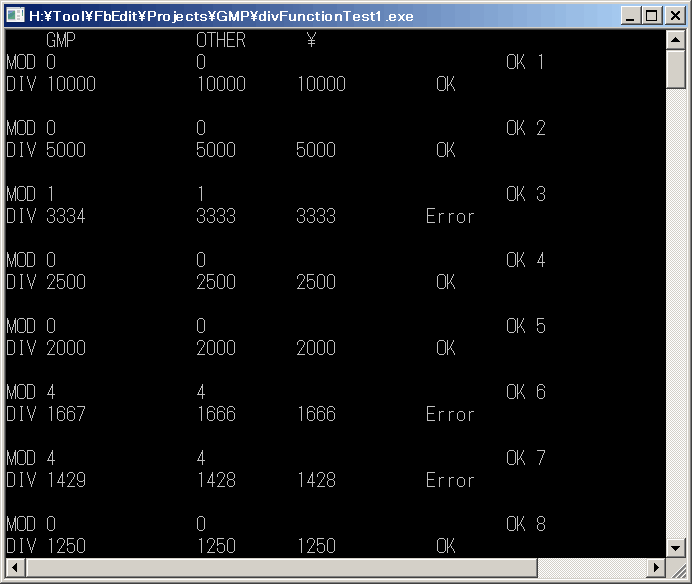