For other topics related to the FreeBASIC project or its community.
Post Reply
277 posts

Damn, I'm not sure anymore if I'll be able to submit a complete entry at all. Sigh.

It will definitely be packed in a hurry. I hate this. :P
Top

Short of any glaring errors, this will probably be my final entry:

The game is kinda fun and is now more challenging, I'll loose points for poor use of sound but i have almost zero musical ability!

Lachie. if you are desperate for a high score routine just pinch mine, it's simple but does the job!
Top

I think it's time to post some more details about my project.

The game is a simple tyrian-alike shmup. Player will have 2 weapons, and various enemy types. Some enemies will shot at you, some wont. Enemy movement will follow randomized curves. Enemies attack in groups. Game has only sfx, while main menu has primitive drum song. Graphics still need tweaking, and also I need to add few extra enemies. Game will have 2 levels with each level ending with a boss fight. Some enemies will drop weapon powerups, some will drop money.

The development will be really tight, since end of compo is near. I'll probably code for 10 hours tommorow to finish it...
Top

ssjx, I'm not desperate for a high score routine. I'm more apathic about my entry. I find it very hard to complete some parts of it, mainly because of lack of will and dislike toward all the hacks I had to employ in my code. I’m torn between flushing the project which I hate to do especially when I’m so near the end, and the fact it probably should be flushed.

I only have time to work on it today for few hours and tomorrow, but Sundays usually suck for me. We’ll see.
Top

See Lachie? That's why you shouldn't use hacks!

Unfortunately, I'm probably going to give up on my project as well, because there's no way I can do all I'd like to do in the time I've got left.

@ciw1973:
Will there be another competition later? I love your competitions, and hopefully I would be able to participate in the next one.
Top

Those are not really hacks I'm using but exceptions and dirt in the code necessary, for example, to separate two game mode, or to code a "level start" animation. I just hate how that crap ruins the purity of my engine (which is not that good in the first place), but it can’t be avoided.

Please, I don’t want to hear about OOP. :P
Top

Well I am going to be tied up from now through the 27th so I am posting my final entry...

To those celebrating it, HAPPY THANKSGIVING!

And to everyone else, Be Safe in your Travels!

Ok. I whipped up the final compo version of my entry, entitled Invatris.

It's a Super Tetris clone with one innovation – irregular playfields. If you don't know about Super Tetris, it's a game by the same people behind the original Tetris, but with somewhat different gameplay. There is a line in the playfield I named demarcation line, and to win a level in Super Tetris you need to clear all lines below it (which are already filled with blocks but with one or more gap in each line).

I'm probably getting really old by bashing my entry so I won't do it again. I had a lot of back luck with it, but who cares? I missed my chance. Anyway, I'll just list the dropped features:

This is probably the final version for the compo, unless someone reports a critical bug before tomorrow, and I have time to fix it.

Ok, I played the latest versions of vdecampo's, Ryan's, aleofjax's, and ssjx's entries, and I would rate Ryan's as the biggest favorite in my eyes. Definitely the entry I like the most (of all available so far). I would put vdecampo's entry on the second place, while aleofjax's and ssjx's share the third place quite far behind the first two entries. The latter two feature interesting gameplay, but still underdeveloped. The first two deliver challenging and exciting gameplay, the most important element, but the gameplay in Ryan’s entry felt more fun, elaborate and varied than in Vandris Escape. I have complaints on all the entries, but since there is still time to fix them and since I am competing against you, you'll have to wait for them after the deadline. ;)

We also have to see what ChangeV and duke4e have prepared. Great compo, that’s for sure.

Updated the download. Same link. Few nitpicks. The old archive had untitled.exe in it so if you have that, get the new one with Invatris.exe.
Last edited by Lachie Dazdarian on Nov 18, 2007 22:02, edited 1 time in total.
Top

I've been away from the FB community for quite a while and I come back (on Friday) to a cool compo, but only a few days left. Arrrgh!

Well I'll see if I can shoe-horn a game out in the few hours I've got left. I've only been coding this since today. And will probably be coding after work tomorrow to get it out by 23:58. ;)

After pulling my hair about not knowing why my multikey routines etc. haven't been working, only to find that Namespaces have been included in FB since the last time I compiled something. :P

My code, so far, is one horrible mess. I haven't really had time to think enough to write it properly. If only I'd seen this post earlier.

Here's hoping I'll have something out by tomorrow.
Top

notthecheatr wrote:@ciw1973:
Will there be another competition later? I love your competitions, and hopefully I would be able to participate in the next one.

Oh, there will definitely be more. I've already promised Lachie that next time around there won't be any restrictions on the graphics or sound side of things. It's going to be more of a theme based competition, and I already have a couple of ideas in mind. Chances the next one will be around February next year.


I'm really glad to hear you say that, as I know you were a little disappointed when it was announced at the start of the competition.

I'd hoped that by limiting this primarily to a game design and programming exercise it would open things up for more people and we'd get come interesting entires. From what I've seen so far, there are more people involved than the last competition, and there are definitely some interesting game ideas, so I'm pretty pleased.
Top

Here's my final entry. I haven't had any time to work on it this past week, so I don't expect to score very high in the graphics category. This is the version before I added the title screen, because I was using an extra bitmap as a map for placing colored jellies on the screen.

It's an odd entry; anyway, it seems better to play than the screenshot shows. ;-) 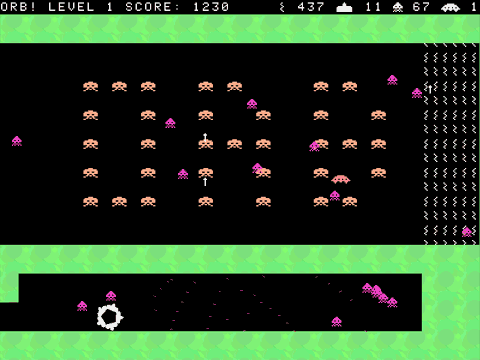 This still isn't a final release, but it's very close to it...
There isn't a menu yet, and there is no proper ending.
Left mouse button is fire, ESC is exit. That's it.
Magenta stuff gives you some health + when you collect 100 of them you get weapon upgrade (weapons has 5 levels).

Be sure to run first_time_run.bat before you start the game for the 1st time.
Top

This still isn't a final release, but it's very close to it...
There isn't a menu yet, and there is no proper ending.
Left mouse button is fire, ESC is exit. That's it.
Magenta stuff gives you some health + when you collect 100 of them you get weapon upgrade (weapons has 5 levels).

Be sure to run first_time_run.bat before you start the game for the 1st time.

but, I hope you include source code for these 2 EXE files in disguise in final release.